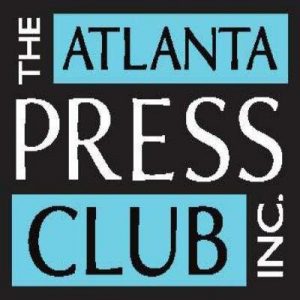 The James M. Cox Jr. Institute for Journalism Innovation, Management and Leadership was the presenting partner for this year’s Atlanta Press Club Awards of Excellence.

The awards ceremony, which attracted an audience of more than 200 media professionals, was held April 13 at the Commerce Club in downtown Atlanta.

“This event is a signature program of the Atlanta Press Club as it showcases the best work of journalists in our region,” said Keith Herndon, director of the Cox Institute. “It was an honor to work with the APC leadership to help make this year’s awards possible.”

The Cox Institute serves as an industry outreach and student experiential learning arm of the journalism department at the University of Georgia’s Grady College of Journalism and Mass Communication. Herndon said the Cox Institute’s involvement in the awards program grew from the notion that the great work recognized by the awards will inspire Grady students.

“Our partnership provides another outreach opportunity,” Herndon said. “It is a way for us to connect with industry in a meaningful way while also encouraging our students to emulate the journalists receiving recognition.”

The winner of the inaugural News Innovation Award was David Armstrong of Georgia State University for his leadership in creating and directing the Georgia News Lab, a program that teaches investigative reporting to students from several journalism programs in the area, including the Grady College.

For a complete list of winners from this years’ awards competition, please visit the Atlanta Press Club’s website: http://atlantapressclub.org/2016-awards-of-excellence-winners/.