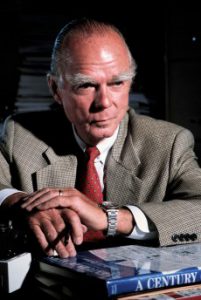 Conrad Fink, Regents Professor of Journalism at the University of Georgia, died on Saturday, Jan. 14 in Athens.

A beloved professor for 30 years following a successful career as an international journalist and news executive, Fink taught generations of journalism students how to report the news and manage journalism businesses ethically, responsibly and profitably. A no-nonsense professor with formidable bushy eyebrows, Fink trained students to write for and manage news companies from Amarillo, Texas, to London and Bejing.

Fink, who held the William S. Morris Chair in Newspaper Strategy and Management at Grady College, created a unique newspaper management curriculum, developed a residence program for visiting professional journalists and recently spearheaded the creation of an endowed program in sports journalism.

“Grady College mourns the passing of Conrad Fink,” said E. Culpepper Clark, dean of the UGA Grady College. “Conrad was a lion of journalism, respected and beloved by generations of students, alumni, colleagues and media leaders. He reported during the golden age of newspapers but also embraced the brave new world of digital journalism. He was a citizen of the world with intense devotion to every student who sat across a table from him.”

UGA President Michael Adams said Fink was “a dear personal friend and the consummate colleague and teacher. He fought valiantly in the last year against difficult health circumstances. We will all miss him and send our deepest sympathies to the entire family.”

“Conrad Fink taught students to be leaders in journalism,” said Kent Middleton, a UGA professor and head of the department of journalism. “From the experience of a journalism career that ranged from Chicago to Delhi, from Tokyo to New York, he taught respect for the story and those committed to telling it. In uncertain times for the news business, Fink retained his belief that democracy needs journalists to report the news and explain complex issues fairly and objectively.”

“Few of us are irreplaceable,” said W.H. “Dink” NeSmith Jr., president of Community Newspapers Inc., “but as a mentor to aspiring journalists, no one can take the place of Conrad Fink. We’ve had dozens of his ‘Finkerized’ disciples, from battlefield newsrooms to corporate boardrooms to Grady College’s classrooms.”

Jere Morehead, senior vice president and provost, said, “Conrad Fink had an instinct for spotting and developing leaders. His contributions to the academic mission of the university are extraordinary—from his commitment to the Foundation Fellows program to the strong relationships he maintained with the media industry and education leaders.”

Fink was appointed professor at the Grady College of Journalism and Mass Communication in 1983. In 1990 he became the director of the James M. Cox Jr. Institute for Newspaper Management Studies. He was named William S. Morris Professor of Newspaper Strategy and Management in 1995 and held the Morris Chair at his death.

Among his many teaching honors, he was a Josiah Meigs Distinguished Teaching Professor, recipient of the Regents Teaching Excellence Award and was named in 2002 Freedom Forum’s National Journalism Teacher of the Year.

In fall 2011, Fink was the first faculty member to be inducted into the Grady Fellowship, a society of Grady’s most accomplished alumni and friends. To those gathered at the Grady Fellowship Tribute evening, Fink said, “What we do for the Grady College and its young people is crucial to the future of journalism, a sacred mission.”

His case study for newspaper management was used at Harvard University, the Poynter Institute for Media Studies and other universities and professional training programs.

For many years Fink’s students were the only American university students accepted to attend professional seminars and training programs at the American Press Institute in Reston, Va.

During his long career, Fink wrote a dozen textbooks, including “Strategic Newspaper Management,” “Media Ethics in the Newsroom and Beyond” and a textbook on sports writing. He was a UGA senior Foundation Fellow and yearly conducted interviews of high school seniors seeking entrance to the university as Foundation Fellows. He also served on committees selecting UGA’s Rhodes Scholar candidates.

“Conrad was a legend. He was smart, Marine ramrod straight, passionate, caring and an irreplaceable friend to the very end,” said NeSmith, who is also vice chair of the Board of Regents of the University System of Georgia and a Grady College alumnus.

In his professional career, Fink rose from a reporter to vice president and secretary of the Associated Press, from which he retired in 1977. Between 1964 and 1967 he was chief of AP’s news coverage of Southeast Asia. Between 1967 and 1970, he was executive director of the new AP-Dow Jones Economic Report in London. After leaving AP, Fink was executive vice president for Park Communications, a newspaper, television and radio company operating in 18 states.

Fink graduated in 1954 from the University of Wisconsin with a bachelor of science in journalism and was the School of Journalism Outstanding Graduate. He was also a first lieutenant in the U.S. Marine Corps.

In lieu of flowers, Fink’s family asks that contributions in his name be made to the Grady College of Journalism and Mass Communication. He will be buried in Sharon Springs, N.Y., near his beloved farm. Plans for a UGA community memorial service will be announced at a later date.