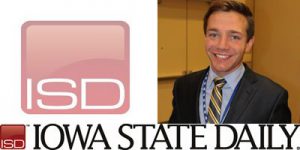 The Iowa State Daily and its reporter Tyler Kingkade are winners of the 6th annual Betty Gage Holland Award that recognizes excellence in college journalism.

Kingkade, a student at Iowa State University in Ames, researched and analyzed political advertising expenditures by corporations and independent organizations at three Des Moines, Iowa, TV stations during the final weeks of the fall 2010 elections. His insightful reporting detailed which Iowa candidates and causes benefitted most from negative advertising by the biggest spenders.

This election followed a recent U.S. Supreme Court ruling (Citizens United vs. Federal Election Commission) that the government may not limit spending by corporations in political campaigns. Kingkade found more detailed information on campaign advertising in TV station files than disclosed on forms required by state and federal election commissions. His research also showed that most negative campaign ads were placed by special interest groups, not the candidates themselves.

“A story of this nature requires an extensive amount of research, and Tyler put in the necessary time and effort,” wrote Jessica Opoien, Iowa StateDaily editor-in-chief, in support of her publication’s entry. “Tyler’s thorough beat coverage of state politics in Iowa, along with his skilled use and interpretation of public records resulted in an informative story.”

Professor Conrad Fink, director of the Cox Institute, said he and Cecil Bentley, assistant director, both were impressed with the enterprise reporting displayed in this story.

“This award, for the first time, honors a body of work, not a single article,” Fink said. “Tyler Kingkade is to be congratulated on his research of records and his analytical skills. The Iowa State Daily is to be congratulated for giving Kingkade the time to do the job properly and the newshole in which to publish his results.”

The annual award honors the late Betty Gage Holland, long-time friend of journalism education at the University of Georgia. An award of $1,000 goes to student reporter Kingkade and $1,000 to the Iowa State Daily as sponsor publication for the winning entry.