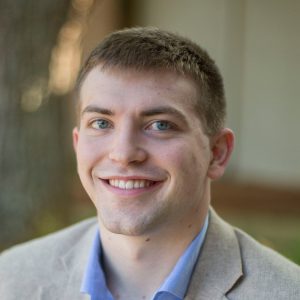 Will Robinson is a senior journalism major at the University of Georgia’s Grady College of Journalism and Mass Communication.

Will Robinson, a senior journalism major at the University of Georgia’s Grady College of Journalism and Mass Communication, was awarded a reporting internship with the Atlanta Journal-Constitution for the spring 2017 semester. The internship is sponsored by Grady’s James M. Cox Jr. Institute for Journalism Innovation, Management and Leadership.

Robinson previously interned at the Atlanta Business Chronicle and Fast Copy News Service and qualified as a Cox Institute Fellow with the Society of American Business Editors and Writers, which included training at the society’s fall conference in New York. Robinson participated in the Grady Mobile News Lab and was earlier named one of the college’s McGill Fellows. He also completed Grady’s study abroad travel writing program in Prague, Czech Republic, and excelled in an investigative journalism directed study project.

Through the directed study Robinson published an exclusive article for the Atlanta Journal-Constitution. The article, “UGA to close hazardous waste facility, pay civil penalty to feds,” focused on UGA’s hazardous materials treatment facility, which is being decommissioned. During inspections in 2014 and 2015, the Environmental Protection Agency found a number of violations at the facility, from improper labeling to radioactive waste that had been held longer than the allowable limit. Robinson discovered and reported on the story through use of the agency’s online databases. The complete story can be found here.

In addition to his journalism training, Robinson was a UGA Honors Fellow in the Washington, D.C., office of Georgia Sen. Johnny Isakson. He also completed an honor’s thesis based on research in international relations theories as part of the UGA Center for Undergraduate Research Opportunities.