Keith Herndon (ABJ ’82), who has served as a visiting professor at Grady for four years, was named director of the James M. Cox Jr. Institute for Journalism Innovation, Management and Leadership beginning with the Fall 2016 Semester.

He also begins a permanent appointment as Professor of Practice in the Department of Journalism where he teaches managing news organizations, entrepreneurial journalism, ethics and a variety of journalism skills courses. He also runs the Cox Institute’s leadership development program and the Grady Mobile News Lab. 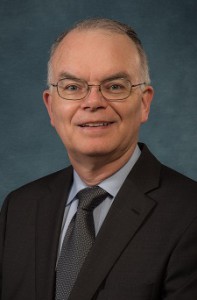 “How lucky we are that Dr. Herndon will continue his fantastic work at Grady,” said Journalism department head Janice Hume. “As a visiting professor he has already won our journalism teacher of the year award and developed signature programs for our students. Keith is a gifted teacher and leader, and students thrive under his mentorship.”

The Cox Institute was founded in 1990 by Grady’s legendary professor Conrad Fink as the James M. Cox Jr. Institute for Newspaper Management Studies. Its name was changed in 2014 to reflect an enhanced mission as a training institute for entrepreneurship and leadership across all platforms in the news media.

“It is an honor to be on the faculty of my alma mater and to work with such talented colleagues and amazing students. Grady is truly a unique institution because of the talent here,” Herndon said. “Professor Fink also began at Grady as a visiting professor and we met during my senior year. It was the beginning of a friendship and a professional relationship that lasted over his long Grady tenure. The Institute he founded will honor his legacy not back looking back, but by looking to the future and training generations of news leaders who embrace innovation.”

Herndon has extensive media industry and academic credentials. He was a research consultant with Internet Decisions, LLC, a strategic planning firm he began in 2005. He was a founding executive of Cox Enterprises’ Internet division, serving as vice president of operations and vice president for planning and product development. He managed strategic partnerships and led technical diligence on Cox’s new media investments, serving on the board of directors of an investment recipient. He was also director of operations at Cox Radio Interactive. Herndon began his career while a student at UGA, working as a reporter for his hometown paper in Elberton, Georgia, and then as a sportswriter for the Anderson (S.C.) Independent and the Athens Banner-Herald. After graduation, he was a Pulliam Journalism Fellow, covering business news at The Indianapolis News. He was a business reporter at The Atlanta Journal-Constitution before becoming assistant business editor, deputy business editor and administrative editor.

In addition to his Grady degree, Herndon holds a master’s degree from the University of Oklahoma and earned his Ph.D. from Curtin University of Technology in Perth, Australia. He is the author of “The Decline of the Daily Newspaper: How an American Institution Lost the Online Revolution” (Peter Lang, 2012), and has published two business books about entrepreneurship and innovation.

The Cox Institute honors the late James M. Cox Jr., who headed Cox Enterprises and Cox Broadcasting Corporation from 1957 until 1974. It is primarily funded by the Jim Cox Jr. Foundation.