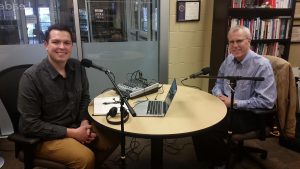 Sponsored by the James M. Cox Jr. Institute for Journalism Innovation, Management and Leadership, the podcast features interviews with faculty and industry guests about the future of the news industry and tips for aspiring student journalists.

Funke plans to produce an episode of the podcast every two weeks for the remainder of the spring 2017 semester.

“In Season 2 of The Lead, I’ll be interviewing more interesting people who have had a significant impact on the media industry,” Funke said. “I’m hoping to hear from a variety of diverse viewpoints about what makes quality journalism.”

Funke produced the first, six-episode season of The Lead during the fall semester with guests including Grady Dean Charles Davis and the National Press Photographers Association executive director Akili-Casundria Ramsess.

“I learned a lot while producing Season 1. Before creating this podcast, I had very little experience with audio and had never built a web show from the ground up. But, after being an Innovation Fellow with the Cox Institute, I’ve taught myself a lot about how to report across media and tackle an entirely new form of storytelling,” said Funke. “I feel more confident as a journalist having created and produced The Lead.”

For updates on upcoming episodes and to provide feedback on the show, listeners can follow @theleadpodcast on Twitter.