“I hate social media,” said David Clinch, with more than a dash of irony, as he began a lecture stressing the importance of social media for newsgathering in the 21st century. 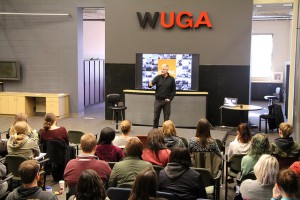 Storyful’s David Clinch in Studio One

Clinch is the global news editor at Storyful, a budding news service agency. On Wednesday, February 18, University of Georgia students and faculty gathered in Grady College’s Studio One to hear him discuss Storyful’s role in the changing news marketplace.

Storyful uses its team of journalists and technologists to discover videos likely to go viral, verify their authenticity and gain permission to distribute them exclusively to newsrooms and advertising agencies.

By distributing these videos to news organizations, like CNN, Clinch said Storyful aspires to be something akin to a wire service for the digital age. Since its founding in 2010, the company has embraced technology and social media alongside a respect for traditional media. By the end of 2013, Newscorp acquired Storyful.

“There is no algorithm for journalism,” said Clinch. “However, journalism can make algorithms better, and algorithms and technology can make journalism better, when you need to distinguish the news from the noise.”

This mix of technology and personal news judgment helped establish Storyful’s unique filtering technique, which he called the “human algorithm.”

Clinch hailed this approach as successful, thus far. The company has helped break hard news stories, like the Boston Marathon bombing, and manages the rights to billions of video web views each year.

Ultimately, Clinch said the rule has been simply to find “a video that makes you go, ‘Woah.’”

This has worked as an approach to newsgathering, but it has also opened a new front for Storyful’s ever-changing business model: selling viral content to advertisers.

The embrace of change seemed vital to Clinch, who outlined his view of media’s recent economic history. He said the news industry has transitioned from owning the entire process to an arrangement where many entities compete to produce, distribute and monetize content. He said this shared system will soon move to one in which a few social platforms control content distribution.

Amid this talk of a tumultuous past and difficult future, Clinch remained confident that Storyful’s approach was one for future journalists to emulate.

“It’s a fascinating time to be in journalism,” said Clinch.