The Tan & Cardinal student newspaper at Otterbein University in Westerville, Ohio, and its editor Lindsey Hobbs are winners of the eighth annual Betty Gage Holland Award recognizing excellence in college journalism. The Holland Award is sponsored by the James M. Cox Jr. Institute for Newspaper Management Studies in the University of Georgia Grady College of Journalism and Mass Communication. 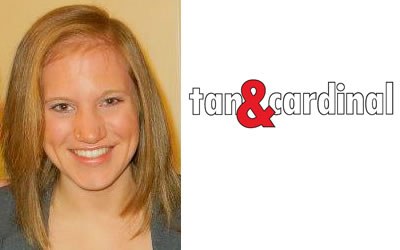 A series of news stories by Hobbs in the Tan & Cardinal and on its website Otterbein360.com reported how the conversion of Otterbein’s campus security force into a full police department in late 2011 had drastically reduced public information provided on campus crime. Editorials challenged this increased secrecy on incident reports and called for officials at the private school to follow Ohio’s public record laws.

“It’s hard enough to effectively cover law enforcement at a public university with the benefit of disclosure laws,” said Frank LoMonte, executive director of the Student Press Law Center, a national nonprofit legal assistance agency. “What Lindsey Hobbs and her newspaper have done in the non-transparent world of a private college takes extraordinary initiative, persistence and guts. Lindsey and her reporters have spotlighted crucial shortcomings in America’s transparency laws, enabling private colleges to exercise state police powers while evading public accountability, and fostering a ‘star chamber’ campus justice system that treats felony-level criminal behavior as grounds for suspension and not arrest.”

Hillary Warren and Mike Wagner are Tan & Cardinal co-editorial advisers.   Wagner said the newspaper is continuing to pressure the university to change its policies and also consulting with SPLC on legal options to create greater openness and transparency.

“No matter what happens from here, it was Hobbs’ passion and commitment that set an example for all journalists, young and old, in pursuing the public’s best interest,” Wagner wrote in support of his newspaper’s entry.

The annual award honors the late Betty Gage Holland, long-time friend of journalism education at the University of Georgia. An award of $1,000 goes to student reporter Hobbs and $1,000 to the Tan & Cardinal as sponsor publication for their winning entry.

Read the series of news stories by Hobbs in the Tan & Cardinal and on its website Otterbein360.com below: