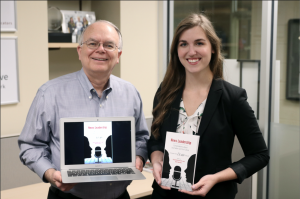 An eBook featuring excerpts of interviews from The Lead podcast won two gold medals in the 2020 eLit Book Awards competition, which recognizes excellence in digital publishing.

The eBook entitled News Leadership: Conversations about Journalism and its Future was released by Kendall Hunt Publishing in December as a project of the James M. Cox Jr. Institute for Journalism Innovation, Management and Leadership, which also produces the podcast.

“It was a pleasure to be able to synthesize important leadership and ethical concepts into an interactive tool for journalism students and educators,” said Charlotte Norsworthy, the Cox Institute’s Morris Master’s Fellow, who was the eBook’s lead editor. “By making these concepts more accessible, we are able to better equip students entering a fluctuating news industry.”

The eLit Books Awards, in their eleventh year, are a global awards program open to all members of the electronic publishing industry. The contest is presented by Jenkins Group Inc., a Michigan-based book publishing and marketing services company that has operated the popular Independent Publisher Book Awards contest since 1996. Electronic books written in English and created for the global marketplace were eligible for entry in 65 categories.

News Leadership features insights from established professionals and emerging thought leaders gleaned from their candid conversations with student hosts, including Norsworthy. Their insights offer advice, provide context, and create a sense of optimism for an industry grappling with transformative disruption.

The Lead podcast debuted in the Fall 2016 semester with Daniel Funke as its original student host for the first two semester-length seasons. Nate Bramel and Noelle Lashley took over hosting responsibilities for seasons three and four and Norsworthy led seasons five, six and seven.  In the upcoming season eight, which will debut during the fall semester, Norsworthy moves into the producer’s chair and will direct the episodes featuring the new student host, Caroline Odom.

Guests from The Lead who are featured in the eBook include Pulitzer Prize winners Alex Jones and Nick Chiles, Peabody Award winner Bob Sullivan, local television news legend Monica Kaufman-Pearson and renowned journalist Charlayne Hunter-Gault. They are among the dozens of guests who share valuable words of advice with the student hosts and their audiences.

“The Lead podcast has evolved into an important educational resource for presenting insights into the leadership challenges confronting the news media,” said Keith Herndon, the Cox Institute’s director and co-editor of the eBook. “We are excited for this work to be recognized with these eLit Book Awards.”

News Leadership can be purchased through Kendall Hunt at https://he.kendallhunt.com/product/news-leadership-conversations-about-journalism-and-its-future

Kendall Hunt Publishing is a family owned and operated publishing company celebrating a 75-years history. The company has an immense library of course content with over 10,000 print and digital titles. For more information about the publisher, visit: http://he.kendallhunt.com.

Norsworthy and Herndon recorded a special bonus episode of The Lead featuring a discussion on the book’s production, which was posted with the book’s release. The episode can be heard here.