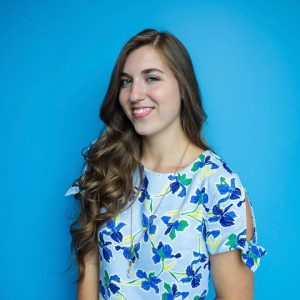 Charlotte Norsworthy, a Master’s degree student, at the University of Georgia’s Grady College of Journalism and Mass Communication, was inducted this semester into the Sphinx Society, which is recognized as UGA’s highest student honor.

Norsworthy serves as the James M. Cox Jr. Institute for Journalism Innovation, Management and Leadership as the Morris Masters Fellow, which is a graduate assistantship funded by the Morris Chair in News Strategy and Management.

Norsworthy is in her first semester of graduate education, but has already served as the lead editor of a forthcoming digital and audio book on news media leadership and was the co-author of an innovative practice paper presented at the Association for Leadership Educators. 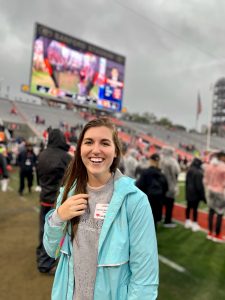 Norsworthy and the other inductees were honored on the field at the UGA homecoming game on Oct. 19.

“It is such an honor to have been inducted into Sphinx Society alongside some incredible peers,” Norsworthy said. “I am so grateful and humbled to continue this esteemed UGA tradition.”

Norsworthy is continuing her education at the graduate level following a stellar performance as a Grady undergraduate.  She received the George M. Abney Honors Award, which goes to the Grady graduating senior who achieved the most impressive record in the university’s honors program.  She was also honored as one of the “Top 100 Student Workers” in recognition of her excellent work as the host and producer of the Cox Institute’s podcast, “The Lead.” That work also led to her receiving the WSB Radio Innovation Award presented by the Georgia Association of Broadcasters. She has continued serving as the podcast’s host this year.

“Charlotte’s decision to continue her education here was a win for the Grady College and the Cox Institute,” said. Dr. Keith Herndon, Director of the Cox Institute and holder of the Morris Chair. “She continues to pour tremendous effort into her journalism training and into her support of Grady and its programs.”

Before returning to Grady this fall, Norsworthy had a busy summer. She was in New York and Washington, D.C. as part of the Journalism in the Era of Disinformation Fellowship (JED). Following the JED Fellowship, Norsworthy was lead editor of  News Leadership: Conversations about Journalism and its Future, a digital book on media leadership based on the six seasons of interviews from The Lead podcast. The book will be published by Kendall-Hunt later this year.

Norsworthy, who also holds an undergraduate degree in political science, has interned at NPR, Turner Broadcasting and served as a Cox Innovation Fellow assigned to Ian Urbina, an investigative reporter with The New York Times.