Grace Donnelly, a senior in the Grady College of Journalism and Mass Communication, completed her Spring 2016 work as the Innovation Fellow with the Cox Institute for Journalism, Management and Leadership. 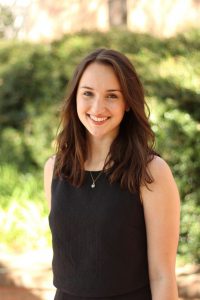 Donnelly, a journalism major from Clarkesville, contributed to the operations of the Cox Institute by maintaining its website and designing and producing promotional material for a lecture series on business and economic journalism sponsored by the Reynolds National Center for Business Journalism. Donnelly participated in the Cox Poynter Leaders program during the semester and also assisted with research into a potential content management system for the Grady Mobile News Lab.  She had participated in the Mobile News Lab during the Fall semester.

During her time as the Innovation Fellow, Donnelly also completed a course in business journalism taught by Dr. Keith Herndon, part of the Cox Institute faculty, who had received a Reynolds Center grant to serve as the Reynolds Visiting Professor in Business Journalism.  Donnelly’s reporting on rising rents in downtown Athens for a class assignment led to a public affairs reporting scholarship. She was also selected to participate in a Reynolds-sponsored internship following graduation.

Donnelly will graduate at the end of the Spring 2016 semester and will move to New York for the Reynolds internship where she will work as a data reporter for Fortune magazine.

“Grace worked very hard during her time at the Grady College and emerged as one our college’s leaders,” said Herndon. “It was great working with her as a Cox Innovation Fellow and seeing how all of her efforts led to opportunities that will enhance her long-term career prospects.”

Donnelly also served as executive editor of Ampersand, an independent student magazine published by the Red and Black.  She had earlier demonstrated interest in business journalism as a Fellow in a training program of the Cox Institute and the Society of American Business Editors and Writers. She previously interned with the Atlanta Journal and Constitution on its data visualization team.