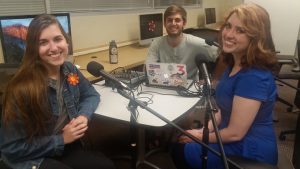 (l-rt.) Charlotte Norsworthy, the new host of The Lead, sits with former hosts Nate Bramel and Noelle Lashley to record the bonus episode.

The student hosts of The Lead podcast, Nate Bramel and Noelle Lashley, graduated in May, passing the microphone to rising senior Charlotte Norsworthy, who will take over in fall 2018.

The Lead podcast is a student production sponsored by the Cox Institute. Its mission is simple: interview media leaders who are visiting the Grady College and have them tell listeners “how to get ahead in the media industry from the people who did it” as stated in the opening credits of each episode.

Bramel said the draw of co-hosting The Lead came from interviewing the guests and hearing first hand their stories, but he added the podcast provided a way “to allow my fellow students to get that same message.”

Lashley said she was concerned about the co-hosting duties at first because podcasting was “a new realm of storytelling” for her.  But she said the interview format of the show taught her the subject was the story. “If you do an interview-based podcast like we do,” she said. “All you have to do is talk to people, and they are fascinating.”

Each semester represents a season with Bramel and Lashley producing seasons three and four during Fall 2017 and Spring 2018. They combined for 14 episodes including interviews with Grady legend Charlayne Hunter-Gault, Atlanta TV news legend Monica Pearson and an emerging Grady star, Polina Marinova. Marinova, who graduated in 2013 and is now an editor with Fortune magazine, was recognized with Grady’s young alumni award this year.

Norsworthy, who has worked as a reporter and editor at The Red & Black, the student newspaper, will intern at NPR in the summer 2018 before taking over the hosting duties in the fall semester for season five.

“Something I’m really interested in is emerging media and ways in which we can communicate as journalists more effectively to different kinds of audiences,” Norsworthy said. “Podcasting is a great way to be able to talk to people in way that they can really understand; something that’s conversational.”

Daniel Funke launched The Lead in Fall 2016 at the beginning of his senior year and hosted seasons one and two. All of Funke’s episodes and those hosted by Bramel and Lashley can be found on SoundCloud here.

“We sponsored The Lead at first as purely an experiment, but our student hosts have delivered more than I could have imagined,” said Keith Herndon, director of the Cox Institute. “I encourage you to listen for yourself and you’ll find thoughtful interviews with amazing guests talking about the important role of the news media and society’s need for ethical journalism.”

Herndon added, “Aside from their power in the moment, these podcasts are building an audio legacy because of the insights of the guests who are accomplished professionals working in the news business every day. It will be fascinating to come back to these interviews in 10 and 20 years and explore how the industry evolved.”

Listen to the full episode here.