These students, family, faculty and guests gathered at the University of Georgia’s Special Collections Library for a dinner ceremony where the students received their Cox Leadership Medal in recognition of their achievements.

Ryan Kor, a master’s student at the Grady College, was recognized as the first Cox Institute Scholar.  Kor, who will receive her graduate degree in May, has served as the Cox Institute’s graduate assistant during the past two academic years and contributed significantly to its programs and research initiatives. 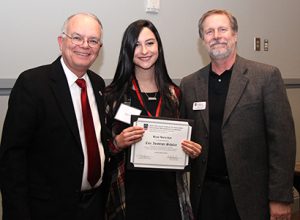 Marilyn Geewax, a contributor to NPR who recently retired as the network’s senior business editor, was the event’s keynote speaker and delivered an emotionally charged message on the importance of journalists and the news media.

“Our job is to serve democracy, period,” she said. “To give our fellow citizens the facts and the context they need to understand our complicated world and make informed decisions about their elected leaders and about public policy.”

Students participating in the leadership program met weekly during January and February with Keith Herndon, professor of practice in journalism and director of the Cox Institute. The sessions featured student discussion leaders guiding conversations about leadership principles drawn from the “Your Leadership Edge” book published by the Kansas Leadership Center.

“These discussion sessions provided a format for serious introspection and contemplation about leadership, and especially about leadership in the context of the news media,” Herndon said. “As these sessions evolved, I became energized and inspired by these emerging leaders. Their passion and commitment to excellence was evident.”

The students participating in the program said they found value in coming together as a cohort to talk about leadership in ways that are not presented in a traditional classroom approach.

“The discussion with my peers was always though-provoking and inspiring,” said Heather Bryan. “I’ve learned so much, not only about leadership, but about myself.” Sabrina Burse said, “Talk about inspirational! I have never been part of a group that left me feeling so refreshed.”

Annie Jorgensen said the program “guided us through meaningful introspection,” adding that “we all walked away from this experience as better leaders, better journalists and overall better people.”

The Cox Institute Leaders program intentionally places the discussion of leadership in the specific context of the news industry and the challenges facing newsroom leaders.

During his welcoming remarks, Grady College Dean Charles Davis, said fostering and recognizing leadership is a cornerstone of the Grady College, “but this is especially true in journalism where we must encourage professionals and those who aspire to become professionals to stay true to their calling as defenders of the First Amendment.”

These sentiments rang true for Tori McElhaney, a Cox Leader, who said the program illustrated a commitment to the truth among her peers. “I leave this semester with hope for what the future could look like and (for) what these people will do to change it for the better,” she said.

Pictures from the event can be viewed on the UGA Grady Flickr page.