The first-ever Journalism Innovation Lab Team from the Cox Institute of Innovation, Management and Leadership finished in the top six teams in the nation, out of more than 50, in the 2022 Reynolds Journalism Institution Student Innovation Competition.

Team members Sophia Haynes, Cassidy Hettesheimer and Gabby Vitali, all journalism majors, created and tested a product called j-notes, which improves news literacy and relationships between audiences and journalists by lifting the veil on how reporters make decisions and cover stories. This web-based design allows for short-form, embedded videos from the journalists themselves that walk the audience through how a story was covered and why — to increase trust in the news.

“The journalists can explain why they decided to write something a certain way, how they found a piece of information, or show a video from the field,” the team said in their presentation. “The goal of j-notes is to build connections with journalists, increase transparency, and help audience members feel confident in knowing what to look for in trustworthy journalism.” 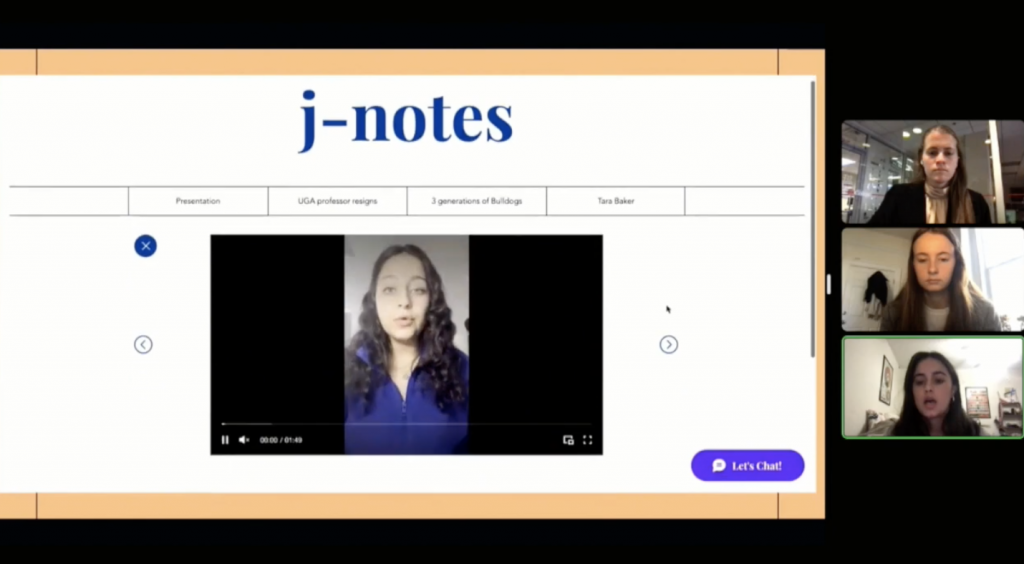 j-notes is a news literacy tool to help journalists communicate the how and why behind their coverage to their audience. 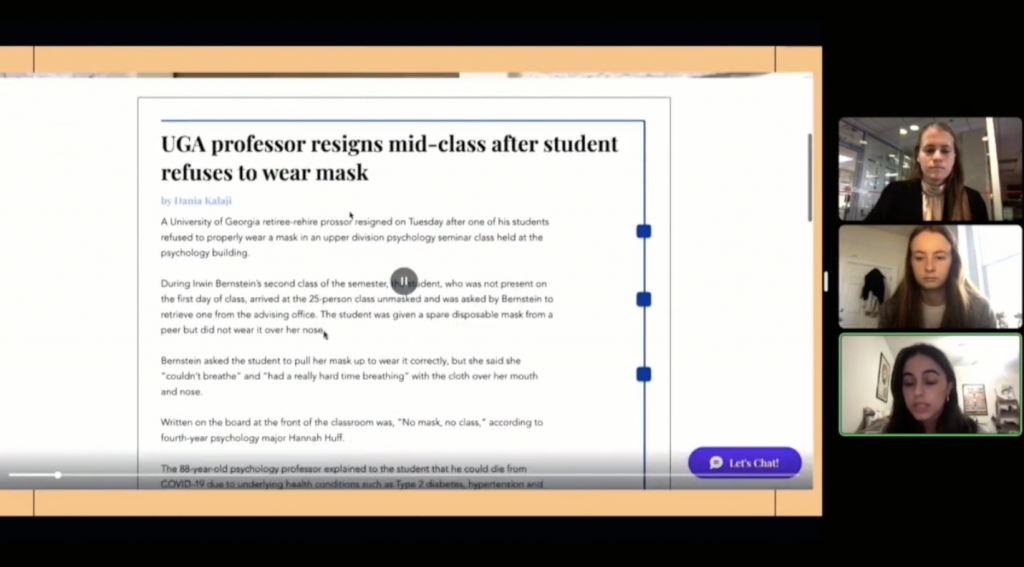 j-notes consists of short-form, embedded videos that allow the journalist to speak directly with the audience.

The team started in fall 2021 with the creation of this research-based concept. Then, they developed a wireframe and made a brief presentation for RJI judges, who moved their team to the second round, where they built the product and tested it with audience members through in-depth, qualitative interviews. Then, the team created a final presentation for a panel of judges.

Even though the UGA team didn’t place in the top spot, Vitali said she gained experience she wouldn’t have gotten anywhere else.

“It was amazing to work with others with the same goal in mind and to bounce our ideas off each other in a productive way,” Vitali said.

According to Cassidy Hettesheimer, the process wasn’t without its challenges, but was ultimately rewarding.

“The process of brainstorming, creating and gathering feedback pushed us to be creative, collaborative and decisive,” Hettesheimer said. “I learned a ton participating in the RJI Student Innovation competition that will hopefully help shape how my teammates and I look at journalism in the future.”

Sophia Haynes said she had an eye to the future of journalism as well, as she did research and the wire-framing process in creating J-Notes, which she believes has a real application in news organizations.

“Hopefully, this idea doesn’t just stop here,” Haynes said. “I love the concept of short-form videos to engage readers in stories and to answer potential questions that may arise while reading.”

Dr. Amanda Bright, director of the Journalism Innovation Lab, said she could not be more proud of the team and what it accomplished in this first-ever endeavor.

“Our three team members were thoughtful, reflective and so professional throughout the process — from the conception of the idea through to the final presentation,” Bright said. “They truly created a product that would be a benefit to any newsroom to create stronger ties and trust between journalists and audiences.”

Bright said the Journalism Innovation Lab plans to create another team and enter the RJI competition again next year.