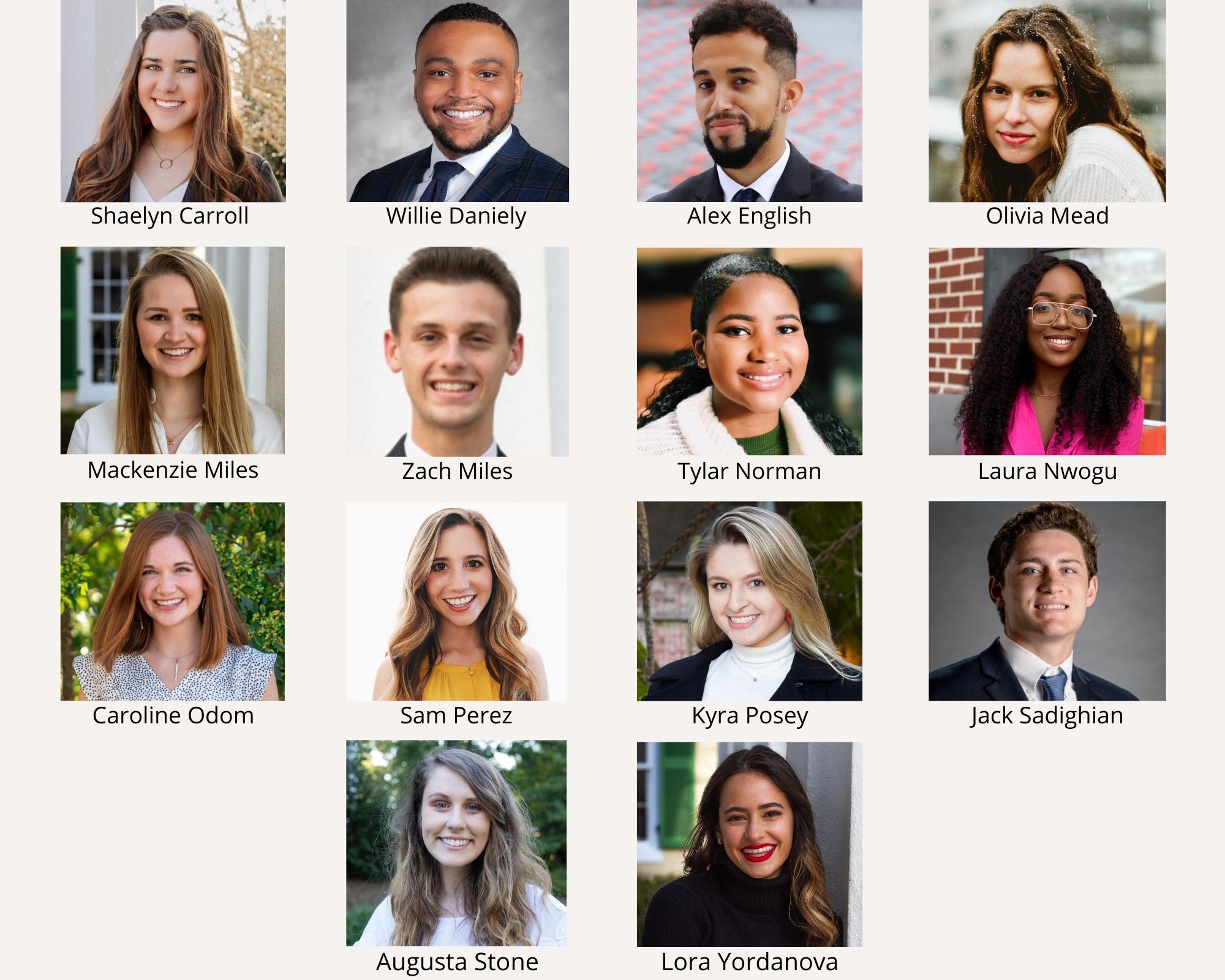 The James M. Cox Jr. Institute for Journalism Innovation, Management and Leadership has recognized its 2021 class of Levin Leaders by presenting the aspiring media leaders with their Leadership Medals.

The students received their medals during a private, socially-distanced dinner on March 15 at the Center for Continuing Education. Grady College Dean Charles Davis attended to recognize the accomplishments of these top journalism students.

“You represent the best of us,” Davis said, reflecting on the competitive selection process. “We want you to know how important you are to the college.”

The Cox Institute also announced the winners of several Journalism Department scholarships during the dinner. Augusta Stone and Lora Yordanova were awarded Conrad C. Fink Scholarships, which are presented annually in memory of the late journalism professor who founded the Cox Institute. Jack Sadighian received the Todd M. Bauer Memorial Award, which was established by the Bauer family to honor their son by helping young journalists establish themselves in their early careers. The Cox Institute also announced Savannah Sicurella, a 2020 Levin Leader, as this year’s recipient of the Barry Hollander Award, which was established by former students in memory of the late journalism professor known for his steadfast defense of open meetings and records.

The students participating in the leadership program met weekly for eight weeks with Dr. Keith Herndon, director of the Cox Institute. The sessions, held socially distanced in the large Studio 100 or over Zoom, featured student discussions about leadership principles drawn from the “Your Leadership Edge” book published by the Kansas Leadership Center.

“These students have been through a lot over the past year and have demonstrated enormous resilience,” Herndon said. “We wanted our program this year to be encouraging while also challenging them to be introspective, empathetic and adaptable as they prepare for immense change in the coming decade.”

Shaelyn Carroll said the program made her think about the importance of embracing change, especially in the media industry, and also said it gave her new perspectives on the meaning of leadership.

“This program made me think of leadership as a choice rather than an appointed position; it is something you can choose to do every single day,” said Carroll.

The 2021 cohort also indicated the training’s emphasis on personal integrity and acting empathetically resonated with them.

“This program made me think of leadership as a way to live,” said Lora Yordanova. “It’s about living everyday with integrity, courage, empathy and vision even when no one is watching.”

Samantha Perez described leadership as “an opportunity to collaborate,” while Laura Nwogu said it means “amplifying the voices of others and giving them a stage to be leaders themselves.”

Since its inception nine years ago, the Cox Institute’s leadership training program has taught 127 of Grady’s best journalism students about leadership principles. The program was renamed the Levin Leaders Initiative in 2019 to reflect the generous support provided by Adam Levin, his wife Heather McDowell, and the Philip and Janice Levin Foundation. The Levin family’s support provides for curriculum development, training materials and other expenses of running the program. Levin is a nationally recognized expert on cyber security, privacy, identity theft, fraud, and personal finance. He was chairman and founder of CyberScout and was co-founder of Credit.com. He authored the book, “Swiped: How to Protect Yourself in a World Full of Scammers, Phishers, and Identity Thieves.”