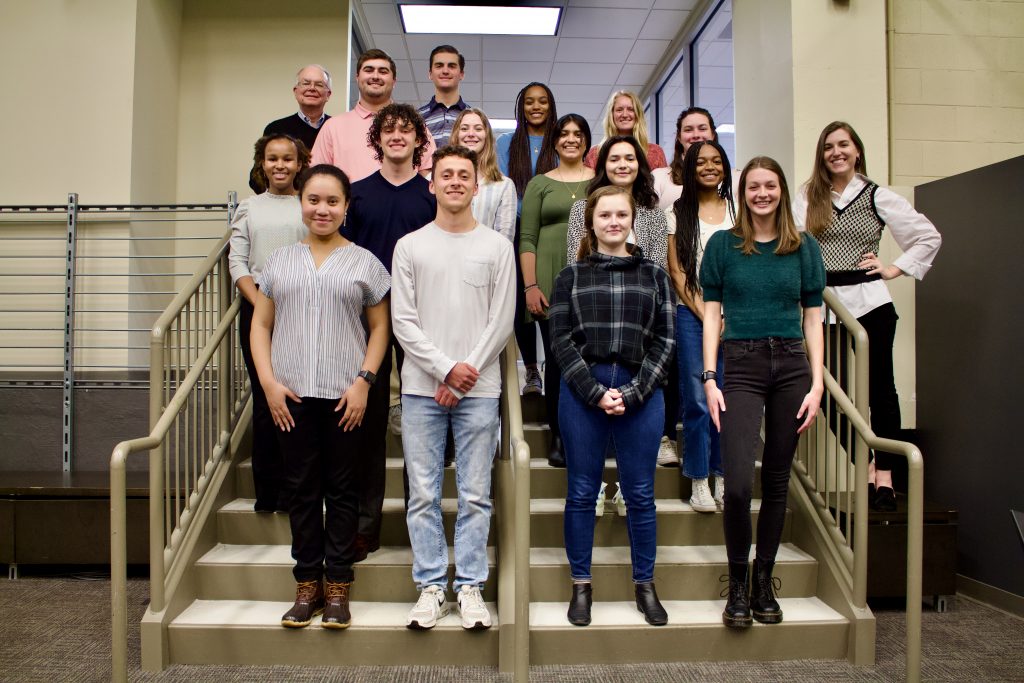 The Cox Institute for Journalism Innovation, Management and Leadership recognized its 2022 class of Levin Leaders by presenting the students with the Institute’s Leadership Medal.

The Levin Leaders were selected for the program from faculty nominations based on their commitment to professional development through work in student media, internships and other student activities. They received their medals during the Institute’s Spring Leadership Dinner held March 3 at the University of Georgia’s Special Collections Library. 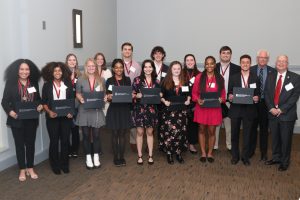 The Levin Leaders for 2022 received their certificates and medals at the Cox Institute Leadership Dinner on March 3, 2022.

Ken Foskett, who is serving as the Institute’s 2022 Industry Fellow, delivered the keynote remarks and encouraged the students not to dismiss the potential growth opportunities that come from learning their craft in small markets and building their careers over time as they gain valuable experience.  “There are big stories in small markets,” he said while emphasizing the importance of local journalism.

The Cox Institute also announced the winners of several scholarships during the dinner. Kathryn Skeean and DeAundria Turner were awarded Conrad C. Fink Scholarships, which are presented annually in memory of the late journalism professor who founded the Cox Institute. Palmer Thombs received the Todd M. Bauer Memorial Award, which was established by the Bauer family to honor their son by helping young journalists establish themselves in their early careers. Spencer Donovan was this this year’s recipient of the Barry Hollander Award, which was established by former students in memory of the late journalism professor known for his steadfast defense of open meetings and records.

The Institute also presented outstanding service awards to Mikaela Cohen and Kyra Posey for their work as graduate assistants.  Cohen is working with Herndon as a teaching assistant and Posey is hosting The Lead Podcast and contributing to the Covering Poverty project.

See a full album of photos from the Leadership Dinner here.

The students participating in the leadership program met weekly for eight weeks with Keith Herndon, executive director of the Cox Institute, and Charlotte Norsworthy, an instructor with the Institute. The sessions featured student discussions about leadership principles drawn from the “Your Leadership Edge” book published by the Kansas Leadership Center.

Brieanna Smith said the program made her think about leadership as an extension of herself.

“I learned so much about myself during this process,” Smith said. “And little by little, I recognized that I am emerging as a young leader.”

Kathryn Skeean said the program never failed to be thought provoking. “I truly learned what it meant to be an active and intentional leader,” she said. “I loved being able to hear the different perspectives of my peers along the way.”

Both Sydney Fordice and Emily Garcia said they had not considered themselves as leaders prior to the program, but now understand leadership as a broader concept.

“This program helped me realize that leadership is an attitude anybody can have,” Fordice said, while Garcia added that she now recognizes “a leader as someone who energizes and mobilizes others, regardless of position or title.”

Since its inception 10 years ago, the leadership training program has taught 142 of the college’s best journalism students about leadership principles.

“Working with these dedicated students in this immersive and intensely personal program has been a very rewarding experience,” said Herndon. “To realize the program reached its 10-year anniversary in 2022 is a testament to the enthusiastic response we’ve received from the students and to the support from those who have made it possible.”

The program was named the Levin Leaders Initiative in 2019 to reflect the generous support provided by Adam Levin, his wife Heather McDowell, and the Philip and Janice Levin Foundation. The Levin family’s support provides for curriculum development, training materials and other expenses of running the program. Levin is a nationally recognized expert on cyber security, privacy, identity theft, fraud, and personal finance. He was chairman and founder of CyberScout and was co-founder of Credit.com. He authored the book, “Swiped: How to Protect Yourself in a World Full of Scammers, Phishers, and Identity Thieves” and is now the host of a popular podcast, “What the Hack.”