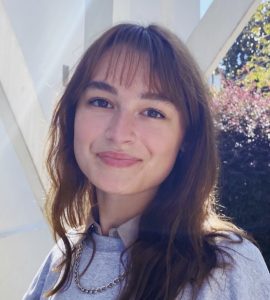 The Cox Institute named Jacqueline GaNun, a rising fourth-year journalism major, as the host of The Lead podcast for the 2022-2023 academic year.

GaNun served last fall as the editor-in-chief of The Red & Black, an independent student newspaper covering the University of Georgia and local Athens community. Last spring, GaNun was also chosen through a highly selective application process for membership in UGA’s chapter of Omicron Delta Kappa, a national leadership honor society.

The Cox Institute expects GaNun will tap into both her student media and campus leadership experiences in her role as host of a podcast about leadership in the news industry.

“I think conversations about leadership rather than lectures about leadership are always a better way to go. As is with most things, people don’t really like being lectured at in most cases,” GaNun said. “But I think that a two-way conversation through audio makes it really accessible for people and they can kind of relate on a way more personal level.”

GaNun recently completed a study abroad at Oxford University as part of UGA’s program there. Before returning to Athens in the fall, GaNun will intern for NPR’s business desk in Washington, D.C., and will gain valuable experience in audio and digital storytelling before taking over The Lead’s microphone.

The Lead podcast explores the intersection of journalism and leadership by interviewing news media leaders. Previous seasons have featured veteran and emerging professionals, including Pulitzer Prize and Peabody Award winners, best-selling authors and other prominent journalists across all platforms.

“I think that professionals are so helpful for telling you their story and how it worked out for them. And that can also be helpful if they tell you their roadmap to where they got to today,” said GaNun. “I think it can be very helpful for people trying to figure out their way in life and in the industry.”

Before serving as editor-in-chief of The Red & Black, GaNun worked in student recruitment for the newspaper and served as a reporter, city news editor and news editor. She also interned for The Current, a non-profit news organization in Savannah, Georgia. In addition to her journalism major, GaNun is pursing a degree in international affairs and a minor in French. She is also in the university’s Honors College.

“We’re looking forward to Jacqueline bringing her keen intellect to The Lead podcast. Her perspective from student media and as an overall campus leader will be invaluable to the work we do on the podcast,” said Dr. Keith Herndon, executive director of the Cox Institute. “We’re also eager for her to bring the new skills she’ll acquire on her NPR internship this summer into the host’s role.”

GaNun’s fall start marks 13 seasons of the podcast (each semester is a season). She succeeds Kyra Posey, who was the show’s host during its past two seasons. Daniel Funke launched The Lead in fall 2016 and hosted seasons one and two. Seasons three and four were co-hosted by Nate Bramel and Noelle Lashley. Charlotte Norsworthy then hosted the podcast for four seasons, before turning the microphone over to Caroline Odom.