The Cox Institute’s podcast, The Lead, will feature a new student host when season nine begins in Fall 2020.

Caroline Odom, a rising third-year student majoring in journalism and risk management and insurance, was named the new host following an application and faculty search process.

“The Lead is such an interesting podcast because it can awaken possibilities in Grady students,” Odom said, adding she wants the podcast to illustrate for Grady students how what they do as students will matter in the future. “We can start creating value for our journalism careers now,” she said. 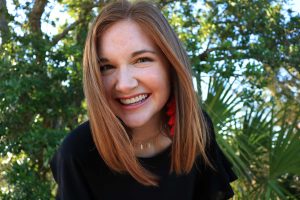 Odom succeeds Charlotte Norsworthy, who was the show’s host during its past four seasons, which included her senior year at Grady and first-year in the master’s program.  Norsworthy will become the podcast’s producer in the fall as part of her graduate assistantship with the Cox Institute.

Daniel Funke launched The Lead in Fall 2016 at the beginning of his senior year and hosted seasons one and two. Seasons three and four were co-hosted by Nate Bramel and Noelle Lashley.

“From its beginning, The Lead podcast has been a student media project focused on experiential learning, and we’ve been fortunate to tap into the abundance of student talent at Grady to make the show something special,” said Dr. Keith Herndon, director of the Cox Institute. “I’m certain that will continue with Caroline as our new host and Charlotte moving into the producer’s chair.”

The Lead podcast explores the intersection of journalism and leadership by interviewing media leaders who visit the Grady College, which provides a guest slate of veteran and emerging professionals, including Pulitzer Prize and Peabody Award winners, best-selling authors and other prominent journalists across all platforms.

Odom explained her academic pursuits at UGA are in line with the show’s goals. In addition to her journalism and business majors, Odom is also earning a leadership certificate through the Institute for Leadership Advancement.

“We’re expecting Caroline to bring insights from her formal leadership training into her interviews with media leaders,” Herndon said, adding that the timing of the host change allows for Odom to work with Norsworthy as a mentor during the transition.

With Norsworthy as the host, The Lead won first place in the 2019 Society of Professional Journalists’ student awards for Region 3. Norsworthy also led a project to convert audio excerpts from the podcast into an eBook entitled News Leadership: Conversations about Journalism and its Future published in late 2019 by Kendall Hunt Publishing.

“It’s been such a pleasure to be part of such an innovative project we’ve been able to grow,” said Norsworthy. “Having the flexibility to learn as a journalist, as a student and as a storyteller has been invaluable.”