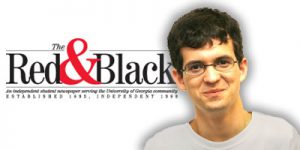 Athens, Ga. – The Red & Black, an independent student newspaper serving The University of Georgia community, and its reporter, Paul Ruddle, are winners of the third annual Betty Gage Holland Award for protecting the integrity of public dialogue on America’s college campuses.

The Red & Black and Ruddle examined ethical issues of privacy, personal safety and sexual harassment after a UGA student was punished for writing derogatory and threatening remarks about a faculty member on “anonymous” course evaluation forms. Open records requests and good investigative reporting detailed how the University responded to a faculty member’s complaint, including use of a handwriting expert to confirm the offending student’s identity.

An award of $1,000 goes to student reporter Ruddle and $1,000 to The Red & Black as sponsor publication for the winning entry. Ruddle is a double major in applied biotechnology and biological sciences.

“What better than a story about a student punished for writing anonymous remarks to illustrate a distortion of public discourse,” wrote Ed Morales, Red & Black editorial adviser, in support of his publication’s entry. “Regardless of the derogatory nature of the comments, doesn’t the student have the right to write what he wants without recourse? Does anonymity not apply when the comments are offensive? And, if so, offensive to whom?”

Reporting and commentary in The Red & Black convinced UGA deans and departments to more closely review and revise methods used in course evaluations. Many have since converted to online forms for ratings and remarks.

“Paul Ruddle followed the finest journalistic tradition in carefully researching this story, tracing the paper trail ? and thus revealing to the campus community a matter of compelling importance,” said Conrad Fink, director of the Cox Institute and Grady College professor of journalism. “Colleges and universities should be citadels of openness and transparency but too often are not. Campus journalists everywhere should recognize their first obligation is to serve their readers’ right and need to know.”