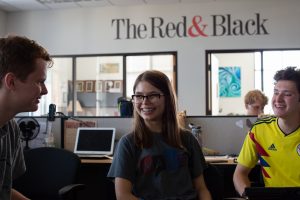 The Red & Black, an independent student news organization covering The University of Georgia, is the 2020 winner of the Betty Gage Holland Award for excellence in college journalism.

The award annually recognizes the best in college journalism by highlighting work that seeks to protect the integrity of public dialogue on America’s college campuses. The award is administered by the James M. Cox Jr. Institute for Journalism Innovation, Management and Leadership at the University of Georgia’s College of Journalism and Mass Communication.

The Red & Black was chosen as this year’s winner for its reporting on an embezzlement scandal that exposed a complete failure of institutional control in the University of Georgia’s Greek Life Office. The Red & Black was the first to break the story of how an employee’s suicide was the aftermath of her theft of $1.3 million over 10 years and how the lack of oversight from her supervisors allowed the crime to go undetected for so long.

In presenting the award, the Cox Institute said without the diligent reporting of The Red & Black, which included extensive use of documents obtained through an open records request filed under the Freedom of Information Act, many of the facts of this case would have been unknown to the University community.

“Despite the unfortunate and concerning circumstances of what happened, I was proud of our team for uncovering gross financial malfeasance and the lack of oversight that allowed it to occur, including details that the university would have otherwise kept under wraps,” said Hunter Riggall, who was news editor when the articles were published.  Riggall, now a reporter at the LaGrange Daily News, said he had covered the initial suicide that happened in the Tate parking deck on campus, “which helped us connect the dots later on.” 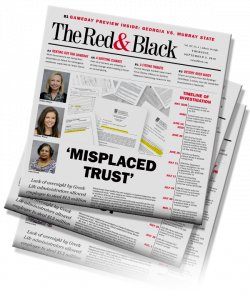 “We wouldn’t have been able to tell this story without the help of our readers, who led us from start to finish with tips,” said Donovan, who was city news editor. Sicurella, who was campus news editor, described the work as an example of crowdsourced journalism. “We were originally tipped off by a reader, trusted the word of mouth of our peers in Greek Life, gathered messages (and) emails from faculty and relied on our past police reporting to fill in the blanks,” she said.

Collin Huguley, then the paper’s editor-in-chief, recalled working with the editors on these stories as his “proudest moments.”  Huguley, now a reporter with the Charlotte Business Journal, said “their tireless pursuit of the truth and the decisions we made in approaching a sensitive, tragic story set a new standard for reporting at our publication.” 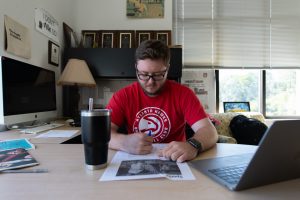 Earlier this year, the Society of Professional Journalists also recognized The Red and Black with its Mark Excellence Award as the Best All-Around non-daily student newspaper in the country.

“We are delighted to add our Betty Gage Holland award to the growing list of accolades for work done by The Red & Black,” said Dr. Keith Herndon, Director of the Cox Institute. “Capturing two of college journalism’s highest awards in the same year is a testament to the dedicated student journalists who work there. We are so proud of their efforts.”

The Red & Black last won the Betty Gage Holland Award in 2011. More recent winners were The Flor-Ala at the University of North Alabama in 2019, The Sunflower at Wichita State University in 2018 and the College Heights Herald at Western Kentucky University in 2017.

This year’s award carries cash prizes of $1,000 to be shared among the student journalists who produced the work and $1,000 to help the newspaper offset its reporting expenses.

An example of The Red & Black’s award-winning coverage can be found at this link.

The Red & Black also provided a detailed recap of how the story was reported in an explanation piece found at the bottom of this story:

The Red & Black published a repository of the documents it used in its reporting:

In response to the scandal, UGA changed policies about how funds are handled at student organizations, which The Red & Black reported here.