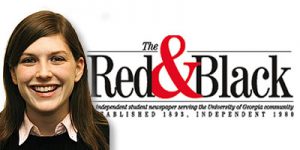 The Red & Black, an independent student newspaper serving The University of Georgia community, and its reporter Kristen Coulter are winners of the fourth annual Betty Gage Holland Award for protecting the integrity of public dialogue on America’s college campuses.

The Red & Black and Coulter, a newspapers/political science double major from Alpharetta, initiated a year-long investigation of sexual harassment by tenured professors against UGA students that resulted in sweeping changes to the University’s sexual harassment policies.

Coulter’s research uncovered two decades of documented complaints against one professor that were kept in an investigative file separate from his personnel records. Documents showed that students feared reprisals if they discouraged the professor’s advances and innuendoes, yet the University was allowing him to leave quietly on his own terms.

“How does a university allow a professor, who students have named on the record as a sexual harasser, to continue teaching year after year?” wrote Ed Morales, Red & Black editorial adviser, in support of his publication’s entry. “The reams of documents, which detailed a sordid tale, page by page, revealed not only a serial harasser but exposed a university complicit in his actions”

“We are well aware that granting this award to The Red & Black for a third consecutive year could create the impression we are favoring the home team,” said Conrad Fink, director of the Cox Institute and Grady College professor of journalism. “But the students who run this newspaper have gotten their teeth into superb investigative techniques and have done reporting that has changed life on the University of Georgia campus. This demands our recognition.”

The Holland Award is sponsored by the James M. Cox Jr. Institute for Newspaper Management Studies in the Grady College of Journalism and Mass Communication at the University of Georgia. The annual award honors the late Betty Gage Holland, long-time friend of journalism education at the University of Georgia. An award of $1,000 goes to student reporter Coulter and $1,000 to The Red & Black as sponsor publication for their winning entry.