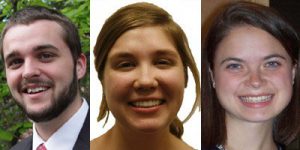 The Red & Black, an independent student newspaper serving The University of Georgia community, and its reporters Julia Carpenter, Jacob Demmitt and Mimi Ensley are winners of the seventh annual Betty Gage Holland Award that recognizes excellence in college journalism.

A series of stories by Red & Black reporters examined claims of sexual harassment against university professors and found that on more than one occasion the names of accusers were not redacted on documents provided by university officials. The university has since changed its policies to better protect anonymity in sexual harassment claims.

“If students and faculty can’t come forward to air their complaints about those harassing them without a veil of protection, it puts them in a position where silence may be the best option,” wrote Ed Morales, Red & Black editorial adviser, in support of his publication’s entry. “As this series reveals, too often those who sought to right a wrong were hung out for all to see, putting their jobs and education in peril, and in two cases forcing the women to leave UGA or take other jobs for less money elsewhere.”

The student reporters filed open records requests, reviewed guidelines of the Family Educational Rights and Privacy Act (FERPA), and talked with university officials, the accused and accusers when examining sexual harassment claims. Their efforts helped identify weaknesses in how this type information is prepared and shared.

“The Red & Black is to be commended for uncovering flaws in a system that demands anonymity to be successful,” said Cecil Bentley, assistant director of the Cox Institute. “Judges were impressed by the records research and in-depth reporting over several months to properly tell this story.”

The annual award honors the late Betty Gage Holland, long-time friend of journalism education at the University of Georgia. An award of $1,000 goes to the student reporters and $1,000 to The Red & Black as sponsor publication for their winning entry.

For more information on the Betty Gage Holland Award, contact Cecil Bentley at cbentley@uga.edu or (706) 542-4993. Holland Award winners and contest submission guidelines are available at www.grady.uga.edu/hollandaward

Read the 2011 Holland Award-winning news stories by The Red & Black below:

· Student identities revealed in harassment files sent out by UGA