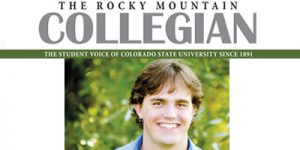 The Rocky Mountain Collegian, a student-run daily newspaper at Colorado State University, and its former editor-in-chief J. David McSwane, are winners of the fifth annual Betty Gage Holland Award for protecting the integrity of public dialogue on America’s college campuses.

An award of $1,000 goes to student reporter McSwane and $1,000 to The Rocky Mountain Collegian as sponsor publication for their winning entry.

The Collegian and McSwane followed up on a tip from a campus police officer and an anonymous letter delivered to the paper that alleged misconduct by Colorado State’s police chief. Their investigation of the university’s top law enforcement official began in November 2008 and resulted in a two-month series, “Abuse of Power,” published in January through March 2009.

Just weeks after The Collegian began its investigation, the university announced that the police chief was on paid administrative leave pending a formal investigation. No reasons were given for the suspension or an inquiry by the Colorado Bureau of Investigation.

The Collegian and McSwane utilized the Freedom of Information Act (FOIA) and the Colorado Open Records Act to obtain copies of confidentiality agreements, salaries and a departing bonus when the police chief later resigned.

“Subsequent hiring of university officials and police personnel is now underscored by an intense effort from administration toward openness and reception of public inquiry,” wrote Holly Wolcott, The Collegian news adviser, in support of her publication’s entry. “Also, the school has restructured its Office of Equal Opportunity and Diversity, the office which received several complaints against the former chief but ultimately did nothing.”

“The Cox Institute is proud – and Betty Holland would be proud – to honor the aggressive, public-service journalism of The Rocky Mountain Collegian and J. David McSwane,” said Conrad Fink, director of the Cox Institute and Grady College professor of journalism.”They served well their reader community, and that is what great journalism is all about.”